Co-op Bank has donated Sh100 million to help in the fight against COVID-19 pandemic that has affected Kenyans in a great way leading to the closure of businesses and loss of jobs.

In a statement, the bank channelled money through the COVID-19 Emergency Response Fund established by President Uhuru Kenyatta in March.

The contribution is expected to support the sourcing of critical life saving medical supplies and equipment especially ventilators.

“The Board of Directors and staff of Co-op Bank is honoured to support with a key cash contribution of Ksh100 million, preferably to be allocated towards the purchase of critical ventilators,” a letter signed by Group Managing Director Dr Gideon Muruki said. 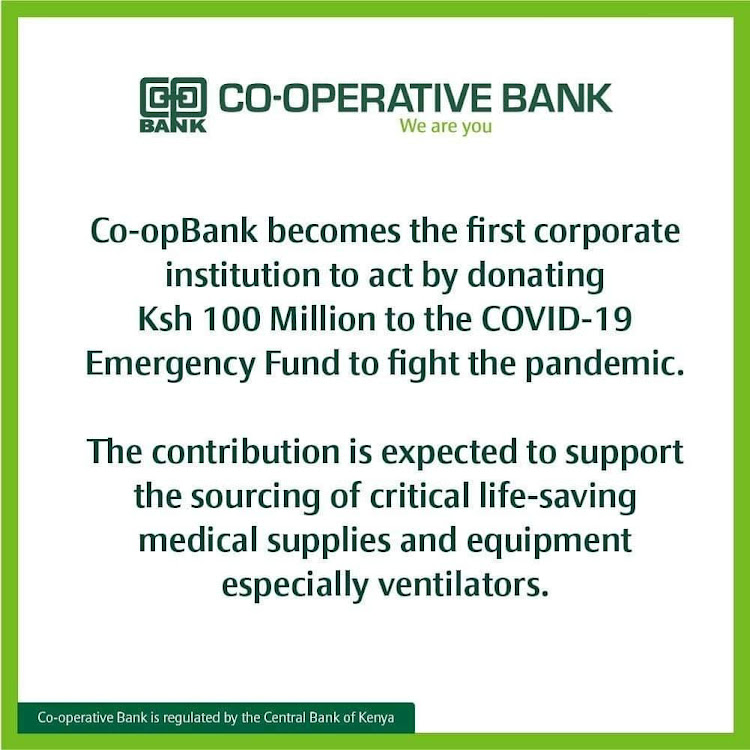 Already 142 cases of Coronavirus have been confirmed across the Country with 4 fatalities and 4 recoveries.

In his latest address to Kenyans, health Cabinet Secretary Mutahi Kagwe said that the government is working with various partners to ensure the disease is contained.

He called upon all Kenyans especially youths to help the government pass the message, also urging the public to adhere to the set rules by the national government.

The co-founder and former Executive Chairman of Alibaba Group Jack Ma has made a second huge donation to African countries towards the fight against the spread of coronavirus.

The goods were delivered through Ethiopia, Addis Ababa, which then took the lead in managing the logistics and distribution to the rest of Africa.

“Most people see Africa today, they say there is no e-commerce, no logistics, no payment. For me it so similar… Africa today is like China 15-20 years ago. Because we didn’t have anything. This is the opportunity” – Jack Ma said at the Netpreneur Summit.

The Jack Ma Foundation and Alibaba Foundation jointly established the Global MediXchange for Combating COVID-19 (GMCC) programme, with the support of Alibaba Cloud Intelligence and Alibaba Health, to help combat the global outbreak of the novel coronavirus.

This programme was established to facilitate online communication and collaboration across borders, as well as provide frontline medical teams around the world with the necessary communication channels to share practical experience about fighting the pandemic.

IMMORAL: The Private hospitals put on notice over overcharging patients

Health Chief Administrative Secretary Dr. Mercy Mwangangi said they had received numerous complaints which are now being handled by the Medical Board.

Some of the facilities, she said, have been selling gloves at a whooping Sh8,000 for a pair.

“This is immoral and unacceptable,” she said, “The medical council has been directed to take up this issue.”

Kenya had recorded 142 positive cases of coronavirus by Sunday, with four recoveries and four deaths including Captain Daudi Kibati, the Kenya Airways pilot who contracted the virus on the airline’s last flight from New York that evacuated stranded Kenyans and foreigners two weeks ago.

On Sunday, the government issued a new directive on burials of victims of coronavirus who must be interred within 24 hours.

“The burials are restricted to less than 15 close family members,” she told a news conference Sunday when she updated Kenya positive cases to 142 after 16 new confirmations.

Kibati was buried in Kitui on Saturday.

Others who succumbed to the virus include a six-year-old boy who was admitted to the Kenyatta National Hospital last week.

All those who have died are said to have had pre-existing conditions, a brutal factor on COVID-19.

Globally, more than 60,000 people have died, with infections now over one million.

Kenya is implementing a dusk to dawn curfew and has declared that masks are mandatory for anyone visiting a supermarket or any other public place.

“All people visiting public places such as supermarkets should at all times wear a face mask to reduce the chance of transmission of this virus,” she said.

The country has already started manufacturing masks in the country, with a Kitui firm producing at least 25,000 pieces in a day.

Coronavirus has killed more than 60,000 people and infected more than a million others globally, with the World Health Organisation (WHO) projecting a further increase.

In Kenya, the Health Ministry is projecting 10,000 cases by April and has already started preparing places to be used as temporary hospitals, including airport hangers and boarding schools.

There are reports of a possible lockdown in the country in the coming days, even though there is no official confirmation from the government or any of its officials.

Health Cabinet Secretary Mutahi Kagwe only alluded to it when he told journalists recently that all options are on the table.

Daily Nation came under fire from a section of Kenyans over its front-page headline published in the paper’s Monday, April 6 edition.

‘Lock us Up, Kenyans Say’ read the controversial headline as the paper cited research that showed 68% of Kenyans are in support of the government enforcing a total lockdown across the country to curb the spread of Covid-19.

According to the research, only 32% of Kenyans are opposed to the idea of a total lockdown as one of the measures to combat the virus.

While the research delved deeper into the issues, including asserting that a majority of those supporting a lockdown was not prepared for it, the Daily Nation headline rubbed many Kenyans online the wrong way.

The front page was met by angry responses from Kenyans who vehemently disputed the assertion that Kenyans were overwhelmingly in support of a lockdown. 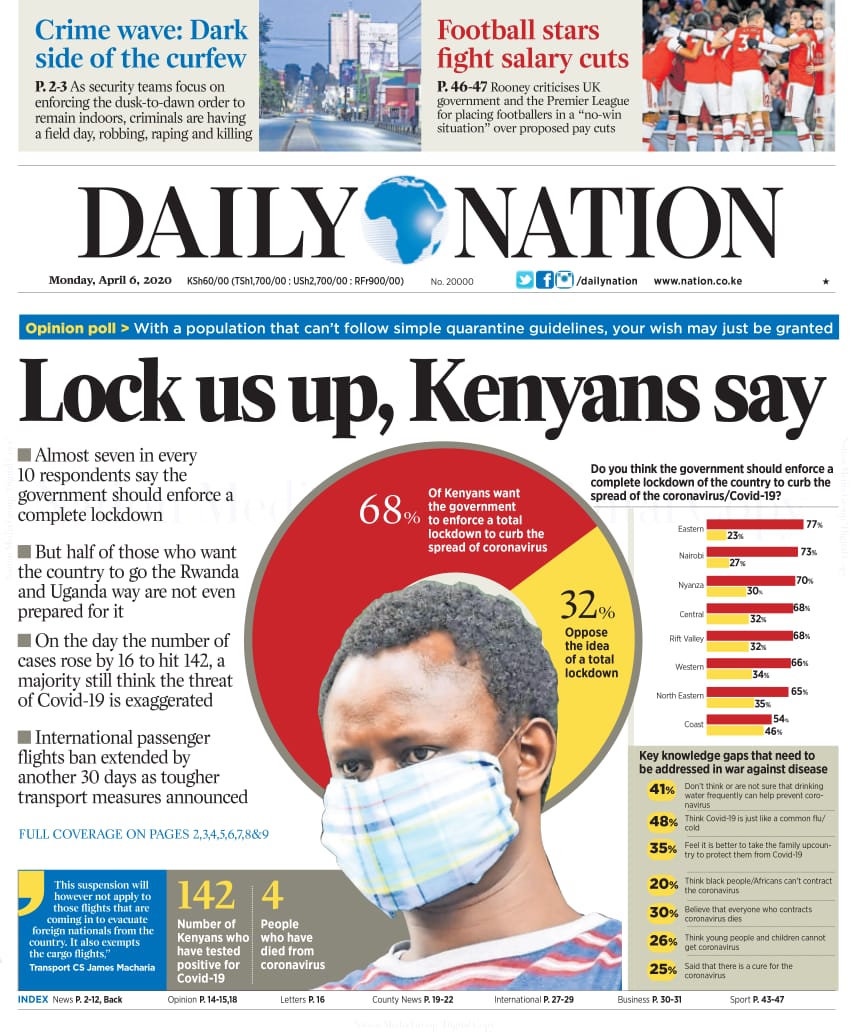 Many of those who expressed reservations on a lockdown noted the inability of many to provide for themselves and their families in such a situation unless the State provided safety nets for households.

“How on earth do you lock-down a country, in a place where less than 10% of the population have a deep freezer and proper food storage?”

“90% live from hand to mouth and you don’t give them daily food supplements. 70% being harassed by landlords to pay rent dues in these hard times,” wrote Mutahi Kariuki.

“Lock down those who are calling for it. This should be the last option, after all, is exhausted,” stated Vicky Odipo.

Some of those who support a lockdown such as Nakuru Governor Lee Kinyanjui has argued that it is the most effective way to curb the spread of the virus, with the Governor recently controversially stating that the country would rather deal with the effects of hunger than deal with tens of thousands of COVID-19 cases.

Others also in support of the lockdown such as political Herman Manyora have called for the military to take charge, with the University of Nairobi (UoN) don arguing in past conversations that it was the only way to effectively enforce physical distancing directives.

“For example, the other day they directed 14-seater matatus to carry only 8 people. I am just from town, that is not happening. The city of Nairobi is dirty, it is filthy. Bars have been ordered to close at 7.30 p.m. from Monday. Do you honestly think they will adhere to that or will the police take bribes?”

“We need the military to take charge of the response team so that we can have some discipline. Do you think the military will simply be taking bribes? No. They will ensure we stick to the measures put in place.”

“The military should work hand in hand with the Health Cabinet Secretary Mutahi Kagwe‘s team to ensure Kenyans are kept safe,” he stated on Sunday, 22 March.

Manyora, however, also noted the urgent need to create a special kitty to ensure households in Kenya were provided with food and other essential items, warning the privileged of an uprising if the most vulnerable in society were not taken care of.

“And those MPs should know, if we go into a lockdown and the poor whose lives have been disrupted and who have lost jobs have nothing to eat, there will be chaos in this country.”

Health Cabinet Secretary Mutahi Kagwe has earned international recognition after the New York-based publication Wall Street Journal recognised him as a hero in the fight against COVID-19.

In a Weekend article dated April 4-5, 2020, titled, “Thank God for Calm, Competent Deputies” under the subtitle “In This Crisis, the Deputies are the Heroes We Need”, Kagwe is defined as one of the best handlers of the pandemic in the world.

Ranked among few other leaders from around the world, among them a doctor from South Korea and another from the UK, the media outlet stated that they had risen from the shadows to take control of a pandemic, members of the public would have only looked to elected officials.

“The leaders who have distinguished themselves under pressure are rarely the bold, charismatic, impulsive, self-regarding, politically calculating alphas we have elected. The real heroes have been, for lack of a better term, career deputies,” the publication states.

The news outlet further describes Kagwe as a leader whose character and personality was thought as not political but now built for the health ministry and the fight against COVID-19.

“Kenya’s unlikely coronavirus hero is health minister Mutahi Kagwe, a businessman with an M.B.A. who had washed out of elective office. In politics, Mr.Kagwe was seen as a technocrat; too ordinary and emotionally distant. In his coronavirus briefings, these traits became assets.

Mr Kagwe projects calm, emphasises evidence and urges Kenyans to face facts, a style one senator described as ‘a breath of fresh air,” the publication states.

The publication references a social media poll by Kenyans.co.ke on Kagwe’s crisis leadership where he was rated 8 out of 10.

The CS has in the course of the COVID-19 pandemic employed a hands-on approach in tackling the virus, urging all members of the public to step up in the fight, acting on the given national directives.

Kagwe in shielding members of the public from misinformation, and the spread of panic directed that all communications on the adversities of the virus in the country be issued from a central place, Afya House.

The recognition comes at the back of a rallying call the CS made to the youth in the country asking them to join in the fight, stating that the young were most vulnerable to the effects of the pandemic but also the most resilient, thus needed to lead from the front.

“As others have done in the past, I appeal to you to really take the responsibility as seriously as the generations that were there with our forefathers.

“If we do not do this it is also you the youth who will suffer the most, it is you, my sons and daughters who will face your children with no jobs and a collapsed economy,” Kagwe stated.

“It is you who will face us your parents as you watch us get sickly and there is nothing you’ll be able to do and worse still, you who will bury us. Not in small numbers but in very large numbers,” he warned.

Kagwe has often advocated for consideration of facts in the war against the pandemic, warning against the spread of false information, and legal action against defiance to State directives.

In Biblical history, God puts a person in position of leadership to steer His people through the crisis. He sometimes does it through rejection like Joseph. The electorate rejected Kagwe. Here he is helping steer Kenya through the coronavirus mud. God has a purpose for everyone and every event.

He was first elected to parliament as Mukurweini MP in 2002 and served in several parliamentary committees before then-President Mwai Kibaki appointed him as the Cabinet Minister for Information and Communication.

Kagwe is remembered for championing for the construction of the transformational East African Marine System (T.E.A.M.S), The first Fibre Optic Project for Eastern Africa. Kenya and the entire region enjoy high-speed internet because of this move.

He is married to Anne Wanjiku Michuki-Kagwe and together they have four children.