Jubilee MPs from the expansive Mount Kenya region allied to the Tangatanga faction that is linked to DP Ruto convened at Mountain Breeze hotel in Embu for a two-day retreat and emerged with tough demands, setting the stage for an epic clash, roping in President Uhuru Kenyatta, his Deputy William Ruto and Raila Odinga.

The same team is now heading to Naivasha for another retreat where they will be joined by their Rift Valley counterparts. The two-day retreat is expected to culminate in a declaration on the 2022 presidential succession.

The leaders will also use the retreat to study the Building Bridges Initiative report — whose implementation has split the ruling Jubilee Party — then adopt a common position.

It is believed that it is the fear of Matiang’i vying for the presidency that has sent Deputy President William Ruto’s allies in panic mode and they are now attacking him from all corners.

Several political analysts claim that the powerful CS may be endorsed by both President Uhuru Kenyatta and ODM leader Raila Odinga for the big seat.

For the better part of the weekend, the Interior CS has been under fire from MPs allied to Tangatanga faction of Jubilee administration.

A Tangatanga senator is on record saying that Matiang’i cannot even be elected a village elder.

On Friday, Matiang’i laid bare his intentions when he landed at a fundraiser in Kirinyaga County accompanied by six governors and more than 50 MPs. Although the CS has not announced intentions of joining elective politics, he has been under pressure to join Presidential race.

He also spoke very highly of the handshake between Uhuru and Raila and didn’t shy away from attacking Ruto and his Tangatanga squad.

Matiang’i have never vied for an elective post in his life. But despite being a political greenhorn, the former University of Nairobi don has performed exceptionally well since joining Cabinet in 2013. He first came to the limelight during his tenure as ICT Minister where he brushed shoulders with media owners during the digital migration in 2015.

He is most remembered for his time as Education CS where he cracked down on the runaway exam cheating. There is no doubt that Matiang’i is arguably the most powerful CS of our time. 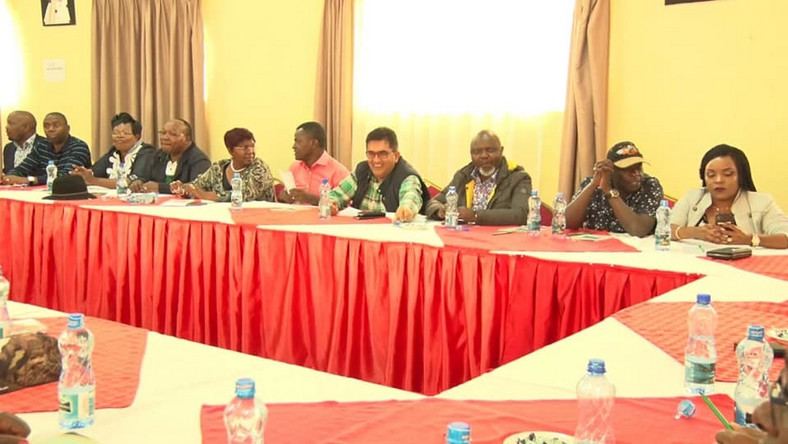 Matiang’i earlier frosty relationship with Raila has thawed and most of the ODM leader’s trusted allies are warming up to him.

He has recently made several trips to Raila’s Luo Nyanza backyard in the company of several ODM leaders, launching a couple of development projects and presiding over fundraisers.

The tough-talking CS has also taken up communal activities, visiting his rural Kisii backyard several times, in a strategy to rally the region behind him.