Founding father Jomo Kenyatta’s rural home at Ichaweri Village in Gatundu South Kiambu County is going to be turned into a museum.

Last week, all the records touching on founding President Jomo Kenyatta – and which are preserved at his Gatundu home – were declared historical records while the home was also declared a  “permanent place of deposit”.

His Excellency the President accompanied by H.E the First Lady, Margaret Kenyatta salutes in honour of the Kenya’s first President, the late Mzee Jomo Kenyatta during laying of the wreath on 22 Aug 2014.

As such, Kenyans were surprised and happy at the same time with this honorable gesture.

Mzee Kenyatta is acclaimed from all quarters of the world as a true son of Africa, a visionary leader. During his tenure, Kenya enjoyed political stability, and economic progress.

His success despite heavy odds is why he will forever be immortalized in African and World history books alongside other black nationalists like Kwame Nkrumah, Nelson Mandela, and Marcus Garvey, just to mention but a few. 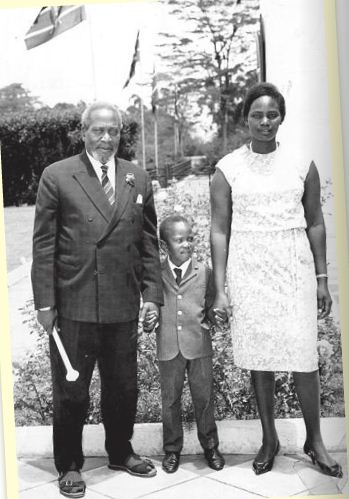 Constantly seen with his father in the pictures available, Uhuru seems to have copied his charisma from his father. Jomo Kenyatta was a charismatic figure, capable of mobilizing the country.

Ichaweri is a small village along Kenyatta Road in Gatundu South, Kiambu County. It is the rural home of two of Kenya’s presidents, Uhuru and his father Mzee Jomo Kenyatta. The old Kenyatta preferred State House in Nairobi to the noisy crickets in his shags, which he often complained of reminding him of the colonialists.

The largest residential pad in Ichaweri is of course the home of the Kenyattas, its V-shaped entrance flanked by the coat of arms and two lions on either side, besides uniformed security detail.

Although there is a chapel inside, it’s from this grand home where Uhuru’s mother, one-time First Lady Mama Ngina Kenyatta, attends the nearby St Gabriel’s Catholic Church. It was at this home where over 600 school children unanimously chose what today Kenya’s national anthem is after the Cabinet ministers were unable to select from the three composed as samples in 1963.

Besides holding Cabinet meetings here, Jomo Kenyatta also received dignitaries in his rural home, including former Israeli Prime Minister Golda Meir in 1964 when Uhuru was playing around as a three-year-old.

Neighbours say that President Uhuru is a frequent visitor at Ichaweri and where they shared special moments with him last year when his son, Jomo Kenyatta was wedding his fiancée Fiona Achola.

“When the president visits his ancestral home, everyone is usually invited and he loves his people. We celebrate and dine together. Alcohol of different is brought in trucks and the day becomes like a national holiday for us. It’s all about feasting and sharing words of wisdom with the president”, said Anthony Gitau, a kiosk owner at Ichaweri village.

“The family has agreed that this is going to be the last commemoration of Mzee in this manner. We shall each celebrate him as we remember him and the manner which we will be doing our things going forward,” said President Kenyatta.

He accorded the family’s gratitude to the former Presidents Daniel Arap Moi and Mwai Kibaki for observing the day for 21 years and 10 years respectively.

Mzee Jomo Kenyatta died in his sleep on August 22, 1978, while on a working holiday in Mombasa.

“As we leave today, let us leave with his (Mzee Kenyatta) spirits in our heart and let him guide us. Let him guide what we say, how we act and interact with one another,” added Kenyatta.

The only question that may be asked is whether time has come for Kenyatta’s body to be buried at this new library.