But we can now confidently reveal that Ruto, who was in the company of his close ally Oscar Sudi, met Kalonzo at the Khartoum airport. 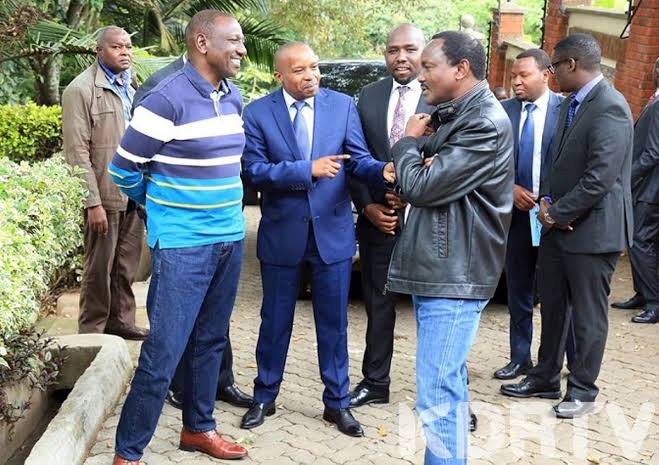 Kalonzo, a Kenyan envoy in South Sudan, confirmed that he had indeed met the DP but the meeting was purely coincidental. He didn’t reveal what they discussed.

“Nothing pre-planned happened. There was no meeting at all. It is a desperate attempt to say the meeting was pre-planned. The DP was in the company of Kapseret MP Oscar Sudi. Also present at the airport was Kenya’s ambassador Chris Mburu,” Kalonzo told the Standard.

The former Vice President further said that he was just in one of his official duties as the South Sudan envoy when he met Ruto. He claimed that Ruto took a flight to another destination immediately after they met.

But we can confirm that the DP jetted back to Kenya, landing at the Wilson Airport at around 11 AM on Wednesday.

Ruto is a close ally to ousted former Sudan dictator Omar Al Bashir. Al Bashir is currently in prison and there is no chance Ruto would have gone to visit him. We doubt if Ruto would have met someone else in the war torn country.

The DP’s office has remained lip tied on his one day mission in Sudan, only saying that it was a private trip.

There have been several reports in Ukambani that Kalonzo is plotting an alliance with Ruto ahead of the 2022 elections. Former Machakos Senator Johnson Muthama said he would lead a delegation to Ruto’s office to broker a deal for the Kamba community.

But Kalonzo refuted these claims and said that working with Ruto is like disobeying President Uhuru Kenyatta.

In a different meeting with Kamba leaders at his Yatta Home, Kalonzo said he would be on the side of the President in 2022.

“Where my brother Uhuru Muigai Kenyatta will be in the next election cycle, I will be there with him. We shall be there. There are some who want Kalonzo to get from there and just fall down,” Kalonzo said.

Ruto responded to this declaration by welcoming Kalonzo to Jubilee.