However, one Makerere academic wondered why the university was allowing the Ruto institute to use a piece of land that had been set aside for former President Kibaki’s Presidential Library.

There are suggestions that regional politics could be at play as the Deputy President strategizes for the presidency, but with an eye on the East African Community.

Political analyst Herman Manyora says the blossoming relationship between the two leaders is as a result of their ambitions converging.

“The whole issue revolves around geopolitics. It would be in the interest of Museveni, in his desire to be the regional kingpin, to have somebody in Kenya who doesn’t seem to challenge that,” said Prof Manyora. 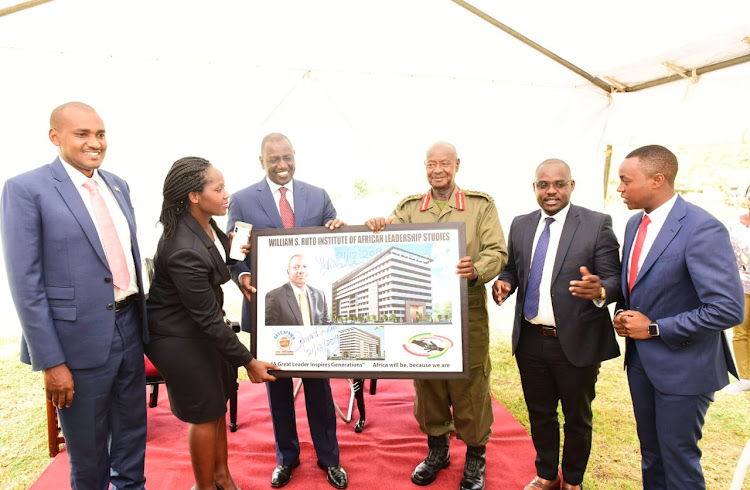 President Yoweri Museveni and DP William Ruto are believed to be behind the postponing of the Sh3b Kisumu Port opening. The two leaders are said to have been secretly working against the project which they see as political tool by President Uhuru Kenyatta and Raila Odinga.

Whereas Ruto feels the construction and completion of the Kisumu Port has not only raised Odinga’s stature in government, Museveni feels Raila is using the project to position himself as the next leader of the East African region, if he becomes President in 2022.

“One of Ruto’s biggest asset is Ugandan President Yoweri Museveni who considers Ruto ideal candidate to succeed Uhuru in 2022. Within government, talk is rife that Ruto is using Museveni to scuttle the launch of Sh3billion Kisumu port.

Kisumu port launch has been postponed severally with Museveni being blamed. Transport cabinet secretary James Macharia revealed that the facility was 98 per cent ready” reads a report in one of the local dailies.

“All is set and the port will start handling cargo in the coming days as we seek to reignite the triangular trade between Kisumu, Jinja in Uganda and Tanzania’s Mwanza Port,” said a source from the Kenya Ports Authority in January this year before the ceremony was called off last minute. The cancellation was because President Museveni changed his diary last minute thereby scuttling the plans.

Uhuru, who was backed heavily by Museveni in the 2013 election, is well liked in Ugandan officialdom. His bromance with Raila has introduced a wrinkle in this fairyland, because Museveni and his entourage have had very uneasy relations with the ODM leader.

Over time, Dr Ruto and President Museveni have gradually been growing closer to each other.

In December 2015, two years after his inauguration, the Deputy President was in Uganda and accompanied President Museveni to a campaign rally in Kapchorwa town in eastern Uganda.

At the rally, he told the crowd that President Museveni “is the best person to continue leading Uganda”.

Dr Ruto’s appearance at the rally irked the Ugandan Opposition, which accused him of meddling in their elections.

“Ruto should be careful. He is hanging around a falling tree, it might fall on him,” Forum for Democratic Change (FDC) leader Kizza Besigye said of Mr Ruto’s activities in Uganda.

South Africa’s Mail & Guardian in September published reports that President Museveni, after realizing the potential of big data in politics, had requested DP Ruto to send to Kampala a team of data specialists in his office to train the Ugandans working for the President.