Kenyans have had enough of the corruption scandals in the country and are coming up with new brilliant hashtags to at least help in fighting the vice that has ailed Kenya for years.

Concerned netizens noted that DP Ruto, the second in command who should be assisting President Uhuru in fighting the vice is, however,  facilitating the vice by accommodating legislators who either have an ongoing court case or is involved in a corruption scandal that is under investigations.

Using the hashtag #TangaTangaThugs, KOT highlighted the leaders who have not lived up to expectations and revealed mega corruptions scandals stretching from land grabbing, inflated government tenders, money laundering, to looting CDF kitties among others.

The way William Ruto has accommodated thieves in his house only shows how his dream for Kenya is, the reason why Uhuru got sick of him is that he values corruption more than anything. 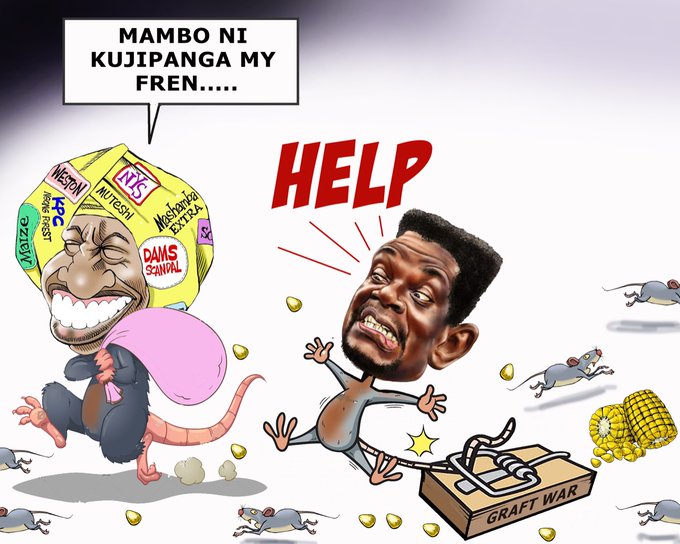 A visibly angry netizen noted that the Tanga Tanga thugs are Enemies of progress. They are curtailing the President’s big 4 agenda for Kenyans.

Another one noted that the real hustlers are the Kenyans who are struggling every day to afford basic things like food, not these people who have enriched themselves with taxpayers’ money. Is DP Ruto using the Hasira Nation to gain the mileage?

WILLIAM RUTO has perfected his art of deceiving gullible Kenyans by continually quoting the Holy book and calling everyone who differs with him a Mganga, Mwizi, Mlevi, Mkongwe etc. He has had his field day with all forms of demeaning political imputations, smudging himself as the messiah for the less privileged Kenyans. What his followers have forgotten is that a thief remains a thief no matter how many Bible verses they choose to quote. Similarly, a killer never changes. William Ruto is a ravenous thief and a dangerous murderer.

We must not allow corrupt individuals to build their empire by stealing money that belongs to taxpayers. Our money!#TangaTangaThugs pic.twitter.com/4aUetlPaUo

Voting for William Ruto who is a Serial thief, Renowned Murderer and unapologetic land Grabber is like accepting back a cheating & Abusive girlfriend hoping that she will shun her old ways. In 2022, DP Ruto shouldn't be near any public office. #TangaTangaThugs pic.twitter.com/uzeIErFIVZ

An Mp has received a total of Ksh.5.7Billion in a period of 7Years and supplied Air. This is not News to the Media nor Tanga tanga adherents like @kipmurkomen who are now Anti corruption crusaders. #TangaTangaThugs pic.twitter.com/veksVOLl5v

This is just the beginning. It's high time we recover all that belongs to the common mwananchi. President Uhuru Kenyatta should not spare any thief. #TangaTangaThugs #EyesOnJusticeMakau kibaki Kilimani Mpesa pic.twitter.com/O5nIRVOlWI

After looting public money the family got courage to ask the public for support. Did they eat the loot with the public? None steals for the community #TangaTangaThugs pic.twitter.com/qmmIo0XxuW

We will not see any meaningful development in the country if we don't uproot this corrupt individuals in government #TangaTangaThugs pic.twitter.com/Ipx8uEx5qo

Bahati MP Kimani Ngunjiri is the thug behind the Ngong forest. Guess who taught him how to get Lands illegally! Your guess is as right as mine. Arap Mashamba. #TangaTangaThugs pic.twitter.com/815qI0CgpI

5. Right now you may think Moses Kuria isnt an MP in Kenya, he's hiding in a toilet after looting Gatundu CDF. Kimani Ngunchiri is silent after grabbing Ngong Forest. Rigathi Gachagua is silent after stealing 5.8 billion. Silence is their other name after theft. #TangaTangaThugs pic.twitter.com/W71BXpYIVQ

When we talk about corruption in Kenya, you will not miss the #TangaTangaThugs in it, they support corruption and misuse of power pic.twitter.com/qUrGCexfRW

4. The group has VERY FEW WOMEN dubbed Inua Mama whose work is to pose for photos and selfies. They have no meaningful agenda apart from masquerading for handouts in Sugoi Criminal Scene. Congratulations to six of them who are now pregnant & the group died. #TangaTangaThugs pic.twitter.com/xj1jqjctI0

1. Irony of it all is that when caught, their Chief Architect William Ruto keeps quiet as if nothing is happening. Ruto denied knowing Waluke. He also said the only Rigathi Gachagua he knows is a PC? 2ndly, the younger thugs are in Twitter defending the old thugs#TangaTangaThugs pic.twitter.com/cXN7GfAJrd

William Ruto should be stoned in public for stealing from public coffers and for all the people he has killed over the years … We must have the boldness to hold the bull by the horn and to say enough is enough ! #TangaTangaThugs pic.twitter.com/cHl2j4ssHy