It’s very interesting to note that the revenue sharing formula has been turned into an Mt Kenya bashing campaign, led by people such as former legislator Billow Kerrow supported by economist David Ndii.

With cooked up economic figures, projected with unflinching propaganda tactics, they are hoodwinking Kenyans to justify the unjustifiable.  The false narrative that if you have a president from your backyard, all your problems are sorted cannot be true. This is akin to saying that if the chairman of a cattle dip comes from your village, all your livestock is healthy.

I recently visited people at their homes in Gatundu South, and found most of them living in abject poverty, despite President Uhuru Kenyatta coming from the area. The same can be said of Baringo Central and Othaya. However, this could be as a result of heightened presidential campaigns that oversell the presidency as the ultimate seat of power and privilege. It has thus become the ultimate political reward for any politician or region.

What central Kenya is telling the rest of the country is that it’s not enough to have one of your own at State House for you to develop. In fact, devolution was meant for exactly that – to reduce the allure for the presidency. It is thus ironic that the proponents for the same seem to be making an about-turn when Central Kenya is equally agreeing with the premise that tomorrow, the region may not produce a president, and that having one hasn’t solved all their problems.

Further, there is a big lie that this formula is all about population.

If this were the case and we focus on absolute numbers, Turkana, which has a population of 926,976 people would get Sh6 billion, yet it is set to get Sh10.2 billion, Sh4 billion more. This indeed is the headroom for addressing marginalization. The same case applies to Makueni, which would get Sh6.57 billion versus Sh6.824 billion, Sh254 million more.

Interestingly, the counties of Wajir, Mandera, and Garrisa with a combined population of 2,409,073 have a total allocation of Sh25,782 billion, while Kiambu, with a similar population of 2.417 million, gets Sh9.44 billion, a difference of Sh16.34 billion.

The wage bill of Kiambu alone is Sh8 billion. Further, the five counties from the Mt Kenya region of Murang’a, Kirinyaga, Nyeri, Nyandarua, and Kiambu have a combined allocation of Sh30.2 billion, while four northern counties of Mandera, Garissa, Wajir, and Marsabit have a combined allocation of Sh44.4 billion. This is more than Sh14 billion and if this formula were to be deferred for two years as per the Kang’ata amendment, it would mean that the Central region will lose Sh28 billion in total.

Further, the per capita income for Lamu and Marsabit counties is 18,826 and 10,786, versus Kiambu and Nairobi at 3,800 and 3,500 respectively. This in itself is extremely unfair as a person in Marsabit gets nearly two and a half times more money than the one in Kiambu or Nairobi. Conversely, when it comes to GDP, 43 percent of the national cake is generated by Nairobi, Nakuru Kiambu, and Mombasa.

Kerrow asserts that the VAT figure of Sh410 billion is paid by all Kenyans and this is correct. It thus follows that the more you are, the more you pay the tax and the same, therefore, applies to the PAYE that stands at Sh293 billion and contributed by 3.8 million people in formal employment.

While Eldas can afford to give a bursary of up to Sh100,000 per learner, Ruiru can hardly get Sh5,000. This form of inequality is thus unacceptable at this time and age. It is a convoluted form of retributive justice, predicated upon the mantra of slowing down the horse for the donkey to catch up.

Some people have argued about the cost of distance covered versus the cost of service delivery. 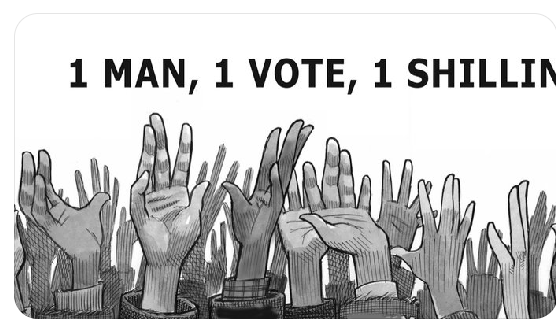 The distance covered in serving many people within a given area is equally long and needs more time and resources. How many kilometers do watchmen cover while opening and closing a gate?

Further, the demand for services by the people while they are non-existent and with limited staff is a big challenge in densely populated counties such as Kakamega and Nandi. Further, the wear and tear caused by high usage reduce the lifespan of infrastructure. You cannot, therefore, argue that a road built-in 1963 or even five years ago is still intact simply because it was built then. The narrative that we are going back to 1963 is this false and at best based on well-calculated half-truths to advance a particular agenda.

Sakaja amendments propose to freeze population data to the 2009 census and that any further increase would see the new formula apply. This is to commit a great injustice to Kenyans, knowing very well that some counties such as Mandera had a higher population 10 years ago with three males to one female, putting to doubt survival mechanisms.

Further, it portends that the only time the new formula shall apply is when more than Sh633 billion shall be devolved. This is unlikely to happen in our lifetime, more so after the severe slow down caused by Covid-19 and our current debt stock at 62 percent to the GDP.

The Equalization Fund as provided for in Article 204 of the Constitution guarantees marginalized counties one-half percent of the national revenue to cater to roads, water, health, and electricity for a period of 20 years and which can be extended through legislation.

The Commission for Revenue Allocation has further come up with a marginalization policy that targets 14 counties up to the sub-location level to cater for this. The majority of these are the ones that have been erroneously framed as losing.

In short, food is served according to the number of people and not the size of the dinner plate.

“In matters public affairs, it’s always about which end you start from, the money(Right) or the heart(Left). Eventually, humanity needs both…. the third way…Keep serving. #