PROGRESS: Uhuru Kenyatta’s war on graft is a turning point for Kenya

A Kenyan governor accused of corruption was ordered to step down during his trial; a minister and his deputy were arraigned in court for alleged abuse of office. Kenyans are not used to such things.

The anti-graft campaign has seen big names in Kenyan Pipeline Company, National Health Insurance Fund, and the National Cereals and Produce Board being arraigned in court to face corruption-related charges.

DCI George Kinoti and DPP Noordin Haji when they met the head of the Public Integrity Section at the US Department of Justice, Ms. Annalou Tirol. (Courtesy)

The landmark ruling by a Kenyan judge that Kiambu County Governor Ferdinand Waititu must step aside during his trial is widely seen by governance experts as a victory in the fight against corruption in Kenya. The ruling could set the stage for other corruption cases in a country where powerful politicians and government officials accused of graft generally continue to occupy the office.

“It’s a precedent in the Kenyan legal system because for the first time, the court spelled out the actions to be taken against a senior official who is facing criminal charges in court,” Peter Wendo, a political analyst and project adviser with the Rule of Law Program for sub-Saharan Africa at the Konrad Adenauer Foundation in Nairobi 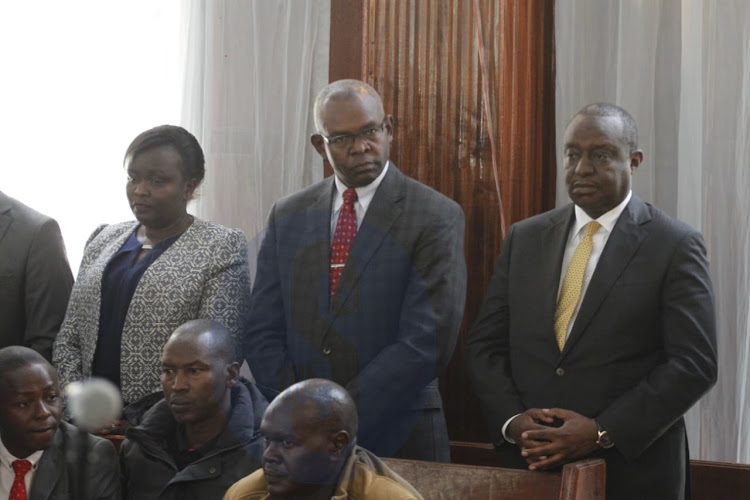 In the past, such people were taken to court but then “the matter just ends without any convictions,”  Wendo said. That’s because the suspects still had access to their offices which meant they could easily influence the witnesses and interfere with the investigations.

According to the Ethics and Anti-Corruption Commission, Waititu is being accused of irregularly awarding tenders worth 588 million Kshs (5 million euros, $5.6 million ), to companies associated with the governor or members of his immediate family. He has denied any wrongdoing and argues that he can account for every cent.

Waititu’s case is taking place after Kenya made headlines when DCI arrested and charged the powerful Treasury Cabinet Secretary Henry Rotich and PS Kamau Thugge.  The two high-profile government officials were accused of conspiring to defraud the public, financial misconduct and failing to adhere to guidelines in procurement procedures relating to the construction of two multi-million dams, Kimwarer, and Arror dams.

In 2015, President Uhuru Kenyatta declared corruption a ‘national security threat’ and vowed to tackle the vice head-on. On several occasions, he declared that no one who engages in corrupt practices would be spared.

President Uhuru is eager to leave behind a legacy that shows he fought corruption to the best of his ability. “The two cases [Rotich’s and Waititu’s] are an indication that there is light at the end of the tunnel,” analyst Peter Wendo said.

People have been behaving as if Uhuru is a dictator who should drag suspects to jail without going through the legal process. They want drastic action. But President Uhuru is delivering on this, too.

There are several ways of killing a cat. In the last ten days or so, Uhuru has done more to fight graft than anyone could have imagined. Uhuru has made hundreds of changes in top public service management, parastatals, and even the armed forces. These changes targeted those who are known or suspected to be corrupt but are too smart to be caught.

While bishops blame Uhuru for not eradicating corruption, they accept the proceeds of corruption in their churches. The Deputy President Dr. William Ruto, the declared enemy of the graft war, has been accused of roaming all over, dishing out to churches what is believed to be ill-gotten millions.

The church, like most critics, has behaved as if it is mandatory upon Uhuru, solely as a person, to fight graft in Kenya while others, including the church itself, stand by watching. This is hypocrisy.

True, many people will not believe that corruption fight in Kenya is on, without seeing DP Ruto in the dock, charged with a corruption offence. They feel that the government fears him, and would not touch him. But Uhuru’s method is also working, cutting the branches of a big tree before laying the axe on the big shoot itself.

To echo Joe Biden’s words; Corruption is cancer, cancer that eats away at a citizen’s faith in democracy, diminishes the instinct for innovation and creativity.”

And as good citizens, we must believe in the fight against corruption.