To cap or not to cap: Why removing interest rates cap is important in saving Kenya’s economy

Such ceilings are often the response of governments facing political or cultural pressure to keep interest rates low. The general idea is that interest rate ceilings limit the tendency of some financial service providers to increase their interest yields (all income from loans as a percentage of the lender’s average annual gross loan portfolio) especially in markets with a combination of no transparency, limited disclosure requirements and low levels of financial literacy.

If ceilings are set too low, financial service providers find it difficult to recover costs and are likely to grow more slowly, reduce service delivery in rural areas and other more costly markets, become less transparent about the total cost of loan, and even exit the market entirely.

From the time the banking operation started in Kenya in 1906 until 1992 i.e. 86 years the interest rates were capped. The banks made reasonable profits and most of them prospered. From 1993 the banks started making abnormal profits. In economics abnormal profits is defined as unfair profits derived from privileged position. This is different from windfall profit which comes from an act of God e.g. sudden change of trading conditions or change of weather destroying a competitor’s crop in case of farming.

In the year 2000 the Donde Bill tried to redress the situation obtaining from 1993 but received very hostile response from the banks. Through the umbrella Kenya Bankers Association the banks went to Court and managed to stall the process.

Mid 2016, the Kenya Government established interest rate ceilings to protect consumers largely in response to political pressure, although the CBK was against it.

Interest rate cap on loans at four percentage points above the base rate published by the Central Bank of Kenya (CBK), Kenyans were full of hope and expectations of lower interest on their loans and higher earnings on deposits. 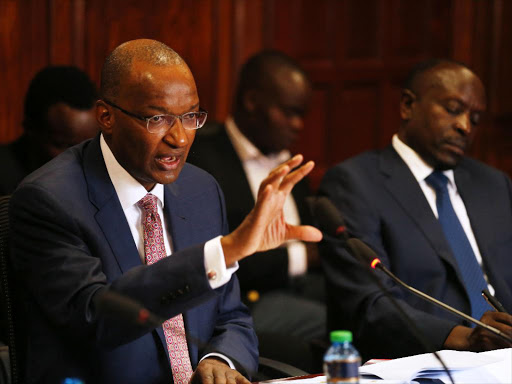 Central Bank Governor Patrick Njoroge presents his views before the parliamentary Finance Committee during a session to review the interest rate regulations. April 12, 2018

Though the bill was signed with the intention of protecting the interests of the majority citizens and businesses to make the cost of borrowing lower, the reality may be that it has hurt the people that the law sought to support.

Lessons learned from countries that practiced “The reality is that there is little evidence from other countries that such interventions have helped the majority of Kenyans and in a number of countries such laws have been reversed to promote financial inclusion.

Introduction of an interest cap in a fully liberalized capital market results in capital flight. A very good example is what happened after the capping was proposed. Shares of the largest Kenyan Banks listed on the Nairobi Exchange plummeted by 10% in response to the news of the introduction of the interest rate cap.

This was mainly due to loss of investor confidence and capital flight.

Interest rate caps can also lead to less transparency in the sector. For example in South Africa lenders introduced so many extra fees and commissions in response to interest-rate caps that loans became more expensive overall.

Several initiatives, such as setting up financial consumer protection regulations and enabling an innovative ecosystem of financial service providers, may serve as effective alternatives to interest rate ceilings. These measures can help prevent unscrupulous lending practices while ensuring the development of healthy credit markets for low-income customers.

Although the asymmetry of information between financial service providers and their clients is a reality, it should be noted that commendable efforts are being made by financial institutions for the provision of financial products in a transparent and affordable manner. Along with the efforts towards more transparency, the downward trend of microfinance interest rates worldwide provides another argument against interest rate ceilings.